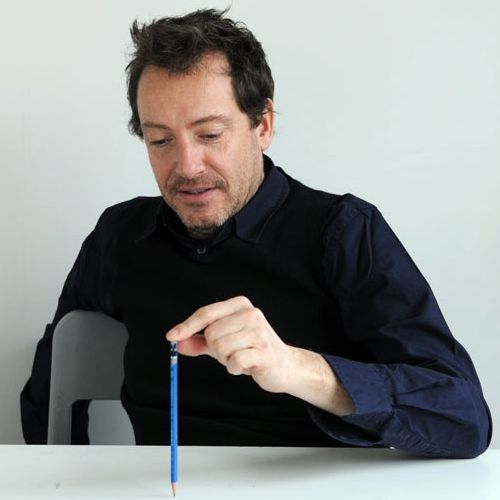 Pierre Charpin was born in 1962 in Saint-Mandé (Paris). An artist by education, his devotion to the design of furniture and objects dates from the beginning of the 1990’s.
His research appears in the projects which he develops for the Design Gallery Milano and the Kreo Gallery in Paris.
In tandem with his more experimental projects his work is recognized by various companies of international renown such as Post Design, Zanotta, Montina, Venini, La Manufacture Nationale de Sèvres.
In 2004 he wins a competition for the design of a water carafe for the Société Anonyme de Gestion des Eaux de Paris (Paris Waterworks),
the carafe “Eau de Paris”; the “Triplo“ vase produced by Venini appears in the selection of the Compasso d' Oro 2005.
The Paris Maison&Objet Fair elects him creator of the year 2005 and 2017.
He has several personal shows and several of his pieces are included in the collections of the FNAC (National Foundation for Contemporary Art) of the Georges Pompidou center and of the Decorative Arts Museum of Paris.

The collection "Fragments" designed by Pierre Charpin for Ceramiche Piemme follows movement and has no plot excepting the investigation into the language of shapes.
Each ceramic piece becomes a lemma of a visual vocabulary wherein the process of subtraction, typical of Charpin, is functional to aggregation, to the organization of fragments of the discourse.
An aesthetics of articulation which, starting with footprints, signs and shapes gives the planning of surfaces and spaces a new sensorial dimension.
Fragments designed by Pierre Charpin presents a poetry of fragment tied to the idea of an open project, free of all formal restraints.