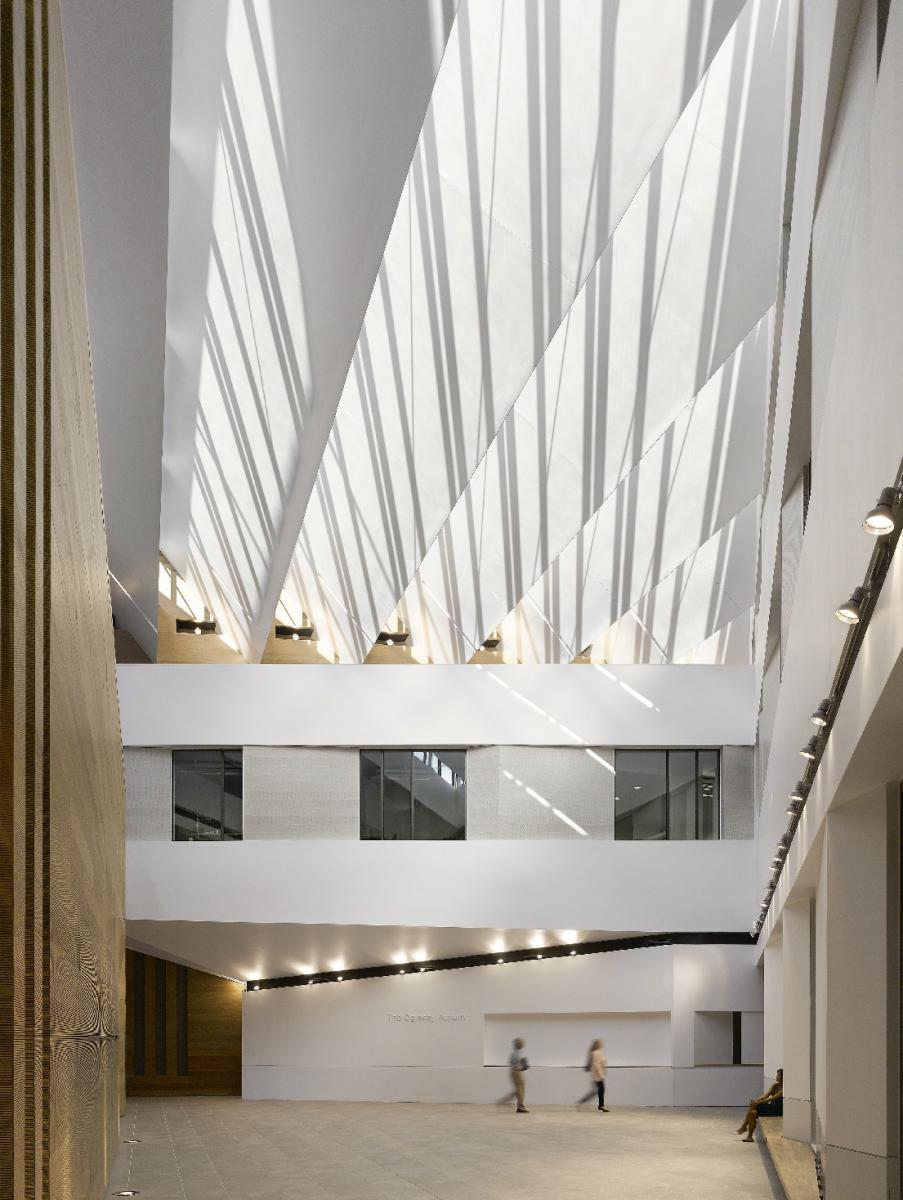 The Manchester-based practice has created a contemporary new building for the musical and academic teaching facilities, providing a state-of-the-art environment for its students.
The new building comprises a 350 seat concert hall, a 100 seat recital hall, a full academic school and over a hundred music teaching and practice spaces.
The new development also re-establishes the local prominence of the library in terms of both its 15th century architecture and public accessibility to its varied contents.

The music school, consisting partly of a medieval fortified manor house standing on a rocky outcrop, is considered a hub of Manchesterlife and of the wider British music scene.
The project was therefore not just about a new school and an old library but about saving a unique and world-class education institution and producing an outstanding building for the nation. As part of ongoing regeneration work in Central Manchester, the new building offers an outstanding opportunity for the city to consolidate its educational and cultural standing at an international level. Located close to Manchester Cathedral, Victoria Station and the MEN Arena, the 2,800 square metre site lies to the north of the original school campus and comprises five buildings congregated around a central courtyard. It serves as a gateway and important pedestrian node for commuters and visitors alike. The school stands adjacent to the confluence of the culverted Rivers Irwell and Irk, contributing to its varied topography.

Roger Stephenson Architects’ building, unique in its shape, responds positively and sensitively to the existing context. The building’s mass and height vary in different locations to provide a considered cityscape.
The new school extends away from the medieval building towards the northern corner adjacent to Victoria Station, emphasising the main entrance to the building. Alongside the construction of a new structure, Roger Stephenson Architects also removed superfluous outer buildings so that the medieval buildings dating back to 1421 are once again visible along Victoria Street.

While the new school amply fulfils the requirements of its brief, the building has been massed to reduce its impact on the mediaeval library.

In terms of character and materials used, Roger Stephenson Architects recognise the duty of all generations to represent their own epoch while acknowledging the endeavours of past generations.
For this purpose, they utilised a palette of solid materials to create a carved, highly sculpted structure promoting a sense of permanence for future decades, and potentially centuries. 500,000 handmade buff-coloured bricks were used to complement the surrounding Victorian railway buildings and provide a backdrop to the mediaeval red sandstone administrative building and library.

About 3,000 square metres of porcelain stoneware from Piemmegres (the Italian company Industrie Ceramiche Piemme’s corporate division specialising in high-tech materials) were installed for the interior floors.
This special “Natural” line of tiles has aesthetic qualities reminiscent of porphyry and combines the highest mechanical performance with strong green credentials (it is made with 15% recycled pre-consumer raw materials).
Piemme is a longstanding member of the Italian association “Ceramics of Italy”. It is also a member of the Green Building Council Italia and constantly develops new materials in line with the most modern environmental criteria.

The new school is divided vertically and horizontally, with the performance related spaces located in the base. The entrance and foyer spaces are located in a glazed strip along Hunts Bank. The music school itself is housed on the above-ground floors, as reflected in the small, punctuated windows designed in accordance with the acoustic treatment needed for these specialist spaces.
The tripartite structure’s internal activities are expressed in sculptural form on the external façade. The building manifests itself akin to the fluid shapes of musical instruments. The fenestration on the main and side entrance elevations reference the stave of a music score.
The curved corners reflect the fluid nature of the site, with culverted rivers flowing beneath it and vehicles circulating the island site.

Internally, the 15th century building cloister provides a reference for the form of the new school. The seven-storey building encloses an airy atrium, a space with a monastic quality that is used by pupils during school time and by the public as a foyer during performances.
Chetham’s roots have been cemented for centuries in its historical buildings. Through the creation of new and the reintroduction of the historic, Roger Stephenson Architects’ design has secured the school’s history for centuries to come. Piemme is proud to have contributed through its 100% Italian ceramic tiles.